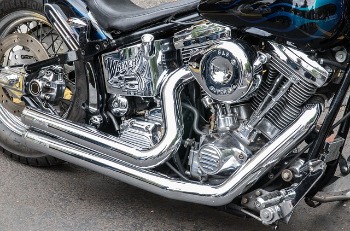 Harley Davidson evolution engine problems can strike fear in most motorcyclists. After all, nobody wants to get stranded in the middle of a desert. So, you need to know how to fix these problems.

To help you, we’ve gathered the most common and rare problems found on this engine. Before getting started, just know that troubleshooting is not as hard as you might think.

Sure, it might take some time if you’re a beginner, but it doesn’t have to be that way. That being said, check this information to fix your motorcycle:

Harley Davidson has always been a very polarizing brand. You either hate it or love it. Most of this hate goes back to their old motorcycles.

Back when AMF owned Harley Davidson. Those years wear a complete disaster for this brand.

But ever since, Harley Davidson has proven to be one of the most reliable motorcycle brands.

Sure, they are more expensive than other brands, and the quality could be better considering the premium tag. But even then, Harley Davidson is an excellent brand for motorcyclists.

However, your engine’s reliability is heavily affected by how often you maintain the motorcycle. Putting off oil changes can put your engine’s health in danger.

Therefore, we suggest reading from top to bottom your owner’s manual to get the most out of your motorcycle.

We know how annoying Harley Davidson 103 engine problems can be—especially when you can’t find anybody with a similar problem. So, here’s a list with rare issues and culprits:

A motorcycle that is hard to start can be a significant inconvenience. However, you’re probably looking at several culprits.

Ever noticed that the needle goes up and down rapidly and doesn’t measure your speed? Well, you probably got a damaged speed sensor.

Run this little test at home before replacing the sensor:

If you’ve determined that the speed sensor is still working, you might have a faulty speedometer joint nut.

Luckily, this is a $3 fix. For more information about this broad topic, watch this video:

While this issue might be related to a bigger problem, it could be as simple as activating the EIT MS system to fix it.

You see, when your motorcycle is in traffic, there’s a high risk of your cylinders overheating.

To get around that, Harley Davidson developed the famous EIT MS system, which allows the engine to pull in more air, decreasing the temperature.

So, activate the system, and the problem should go away.

After covering rare Harley Davidson evolution engine problems, let’s take a look at some of the most common issues.

Having trouble starting up your motorcycle? Well, you might want to check your oil pressure. If you’re getting low oil pressure, the engine will have a hard time running.

Although this problem might be terrifying for some drivers, fixing your oil pressure can be as simple as changing the oil.

Motorcyclists should know that they must change their oil after a specific interval.

When they are past the interval, the oil levels will decrease. This can lead to several issues like low oil pressure.

To fix this problem, change your oil. But if that doesn’t solve your problem, check your fuel pump.

A faulty fuel pump will drop the oil pressure, leading to power loss and stalling.

Noticeably, the EVO engine had problems with the cylinder gasket. Although they are not as common as you might think, they can hit you out of nowhere.

When this gasket stops working, the gasket will leak, causing white smoke. This problem seems to occur after 65,000 miles.

Although there are several reasons why white smoke is coming out of the exhaust, check the head gasket first.

Having done that, watch this video for more information about this problem:

The issue with the cam chain tensioner is one of the most well-known Harley Davidson twin cooled engine problems.

This problem was notoriously found on 1999-2006 models. Thankfully, Harley seems to have fixed this problem, and it’s now in the past.

But if you’re one of those drivers, you’ll have to replace the chain system entirely with a new one.

Although this kit is quite expensive, you’ll eventually have to replace the stock chain system if you want to get rid of the problem.

When drivers hear an unfamiliar noise coming from the bike, they get scared. After all, noises are often related to a bad engine.

But don’t freak out just yet—you could have a broken rocker support. That said, consider these possible scenarios:

Although several parts can shut off the engine randomly, motorcyclists have reported that a faulty temp sensor causes the issue.

If that doesn’t fix your issue, check for broken vacuum lines. These lines get damaged over time, causing engine stalling. And finally, check your fuel pressure regulator, or FPR for short.

Problems with Harley Davidson 103 engine can be related to bad ignition coils.

The ignition coil has a simple job: to convert the current volt to a much higher voltage to fire the bike. Unfortunately, they tend to go out from time to time.

But since we don’t like throwing parts for the sake of it, here’s how to check the ignition coil on your own:

It’s not always easy to find what’s wrong with the motorcycle when it won’t start. As scary as this situation might be, check the starter relay. If your relay quit working, the engine won’t run. After replacing this part, the bike should work again.

How to solve Them One by One

Now that you know why your bike is acting up let’s take a look to learn how to fix these problems.

As we explained before, to fix the low oil pressure, you have to refill your oil. For this, you’ll have to find out your oil type.

Once you figure that out, drain the old oil and then remove the old filter. After that, install your new filter.

Next up, replace your sealing washer if it got damaged. After replacing it, install the drain plug and then pour in the new oil according to your owner’s manual.

Like we said before, a faulty cylinder gasket usually causes engine smoking.

Replacing this gasket takes some time and experience, and therefore a professional mechanic should take care of this.

Once you’ve replaced the cylinder gasket, the smoking issue should be gone.

To fix the cam chain tensioner problem, replace the whole unit. Although this kit is expensive, about $750 for that matter, changing this kit will get you out of so much trouble in the future.

Want to learn how to replace it? Watch this video:

Unfortunately, there’s no concrete answer as to why your motorcycle is so loud when running. As you saw before, you could have several problems. Therefore, you have to diagnose your bike carefully.

One common problem is the air cleaner cover. If the cover went missing, get a new one, and the noise should be gone.

The same goes for the bearing on your brake lever. If there’s no bearing, get a new one.

As we noted, if your engine randomly shuts off, check the temp sensor. This job is not as hard as you might think, but it takes some time to pull it off.

First, you have to remove the seat and then disconnect the battery terminal. Once that’s done, remove the gas tank. With that out of the way, you should be able to replace the old temp sensor.

Bad ignition coils can cause power loss. So, it’s most likely your culprit. Luckily, replacing them does not take much time.

To replace the ignition coils, remove your seat from the motorcycle. Once that’s done, disconnect the negative terminal on your battery.

Next up, disconnect the connector from the old coil. Now take and put the new back in, and you’re pretty much done.

To replace a damaged relay, simply take the seat out and then disconnect the negative terminal. After that, pull out the old relay and put in the new one.

We get many questions about Harley Davidson’s evolution engines. So, to clear up some doubts here’s some information about this engine:

To this day, Harley Evo motors are one of the most reliable motors in the market. Although this motor can run into some issues, it’s nothing to worry about in many cases.

How long will a Harley Evo engine last?

A typical Harley Evo engine should last 150,000 miles or more. However, the lifespan can change depending on how often you maintain your motorcycle.

For example, changing the oil is a simple way to extend the lifespan.

How much does it cost to rebuild a Harley Evo motor?

Why do Harley engines shake?

Yes, it is normal. Harley engines tend to shake when running. Although this might seem like a design flaw, you have nothing to worry about.

But if it’s making some noise, make sure that the saddlebags didn’t come loose.

Harley Davidson has proven to be one of the most popular and reliable motorcycles in the market. But as you know by now, Harley Davidson’s evolution engine problems are not unheard of.

But before you go through every single step, we covered above. You should always check and eliminate the easy stuff.

Avoid those “uh, I guess I forgot those were a thing” kind of moments. Once you’ve ruled out the obvious stuff, begin inspecting your motorcycle thoroughly.

However, if you’re having trouble diagnosing and finding your problem, take the bike to the dealer. It might be expensive, but they’ll get you out of trouble.