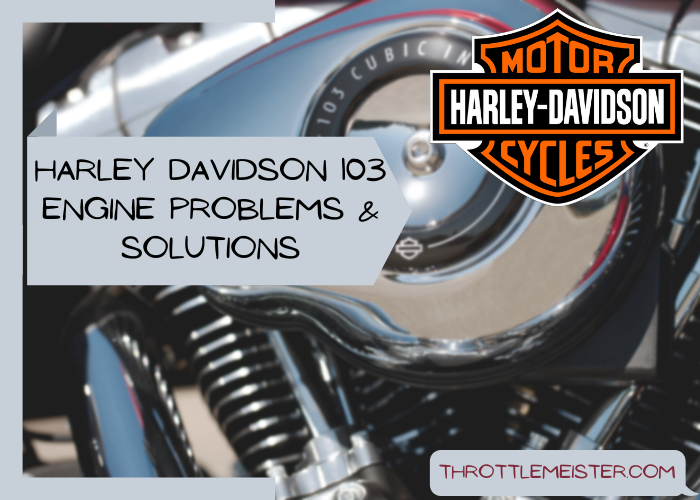 One of the essential parts of the motorcycle is its engine because it is like the brain of the bike.

Therefore, Harley Davidson 103 engine is our main topic for today, and here we will tackle this problem and solve it.

Knowing this information can help them fix the problem immediately, especially when needed.

What is the Harley Davidson 103 engine?

When it comes to speed, this engine can go up to 100 to 120 mph. As a result, this engine became the standard engine of Softail and touring models.

This engine is one of the big engines that Harley Davidson released in the 2010s. 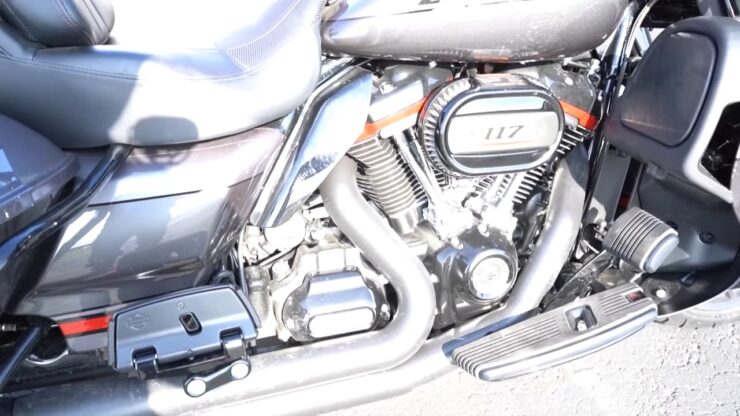 The 103 engine has an oil cooler because it serves a huge role in the engine. It circulates the oil before it flows into the rest of the bike, and without it, the bike will most likely overheat.

This feature improves the engine fuel of the 103 engines. In addition, it makes the engine more fuel-efficient, so it will not consume too much gas even if the engine is more extensive.

The Harley Davidson 103 engine has 75 horsepower with 90 ft to 100 ft torque. With this power, you can run on big highways since it’s the power of big bikes.

Harley Davidson bikes usually have this feature. Considered as the sixth gear that reduces the engine rpm by 11% for smooth riding on highways.

This feature started in 2006, and until now, Harley Davidson has this for better engine performance.

The 103 engines don’t have wasted spark as the ignition system uses dual coils with 12mm plugs.

The Harley Davidson 103 engine has a Bathtub design of a combustion chamber. It is one of the more manageable parts to find, so replacing it is not hard.

The good thing about this combustion is that it speeds the burn and raises the compression ratio without any problem.

We know that you love and adore the 103 engines, but it is essential that you also know the Harley Davidson 103 engine problems that you might encounter in the future. 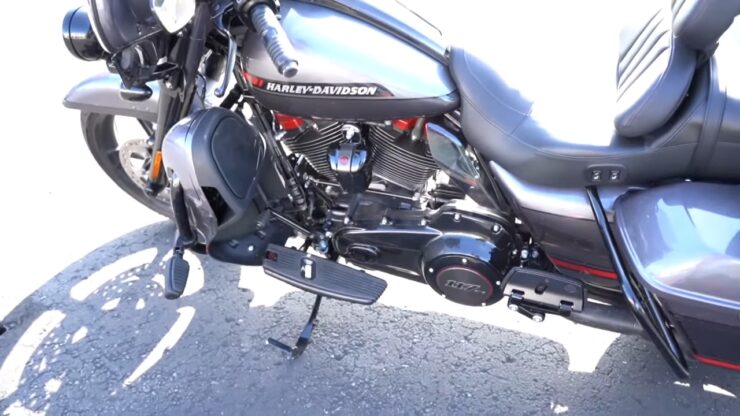 There are some issues concerning that the 103 engine overheats and can burn the riders.

This problem can shorten the engine’s life aside from it can cause accidents to the riders.

Pressed with the 400-ton press at the factory and sooner, it will come out of the crank earlier than expected.

There is a lot of issues that can happen if the crank pin does not function well.

The 103 engine creates a noise like ticking, chattering, pinging, and tapping. Maybe even any noise that you can think of, this engine produces noise in any model of Harley Davidson.

This is a common issue for most Harley Davidson bikes. It affects most of the bikes released from 2007 to 2012.

If you experience one of these problems, here are some of the solutions that we and some Youtubers did.

There are some things that you need to consider when you experience this problem.

Know what compression are you running. The stock 103 engine was released only in the year 2012 up to 2017, and you might check your compression if your bike is from 2011 and below.

The solution would be installing an electric compression.

This video will help you understand everything about electric compression and how to install it with your Twin Cam 103 engine.

How To End Up Harley Davidson 103 Engine Noise

They say that the noise of the Harley Davidson 103 engine is normal, but if it is bothering your big time, here is a solution with video to help you decrease the noise it releases.

The solution that these Youtubers did is by installing rocker lockers with sleeves that or locked up the shafts, so they will not make excessive noise.

You can see the difference between the one with rocker lockers sleeves and without that in the video.

Pros and Cons of Harley 103 Engine

The 103 engine is potent that even if you drive it over 80,000 miles, it still feels tight without any rebuilds. This engine proves its longevity with this.

Unlike the other Harley Davidson engines, the 103 engines have only minimal issues that can solve quickly with proper guidance.

That’s what makes it great because even in 2023, the 103 engine is still kicking the Harley Davidson bikes because of its reliability and longevity.

If you came from the lower engine, of course, you would get better performance. However, it’s more powerful and uses sixth gear that gives smooth driving, especially on highways.

This engine is potent because it can climb hills, or you can ride with entire luggage at the back.

Enough with the Pros, and let’s talk about the cons of the engine.

As we have said before, there are some problems that you might encounter or might be encountering now—one of the common problems that every Harley Davidson 103 engine owner is the overheating engine.

Bikers said that this happens when they are hitting more miles and more extended riding. However, the 103 engine comes with an oil cooler.

You can see the solution in the middle part of the article.

The supremacy of the 103 engine was from 2012 to 2017. That’s the time that Harley Davidson released bikes with stock 103 engines, however, they started releasing 103 engine kits earlier.

Upgrading from a lower engine to 103 can cause some minimal problems if it does not meet its requirements.

Overall, the Harley Davidson 103 engine is powerful and worthy. So, if you are thinking of upgrading or getting a bike with this type of engine this year, it’s still worthy of its price. 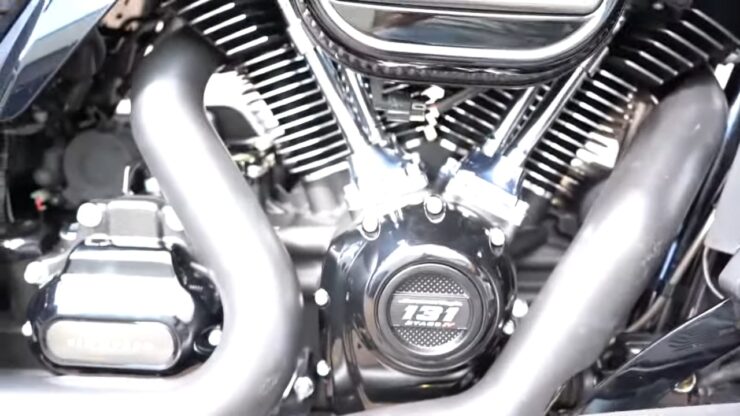 Harley Davidson is not cheap, and its parts as well. However, repairing it can cost you money if you do not maintain it properly.

To avoid wasting money because of being careless when it comes to taking care of your bike, maybe now is the time to focus on maintaining it.

When your bike reaches 5000 some things that you need to check. Checking this can save you from the extra cost of repairing in the future if you ignore maintaining these things.

It’s an easy task, and even you can do this. First, start draining by starting the drain plug and snug it.

Make sure that it tightens to 14 to 21-foot lbs. After that, remove the gill plug, pour three full quarts into the allocation, and check your oil level.

There are different ways to check the engine’s idle speed. This is very important because it can tell you if the engine has a leak and need some repair.

Take note that the lower the speed, the better, and for some vehicles, it should be lower than 1000 rpm.

Spark Plugs are very important to the 103 engines because it helps the engine to produce power. The mixture of the air and fuel does that, and the spark plugs supply the spark that ignites it.

4. Check operation of all electrical equipment and switches

Make sure that everything connected to the engine is in the proper position. One small mistake can damage the engine and other parts of your bike.

The bike will not be starting if some connections are not in proper contact.

It’s mostly the same by checking the electrical connections. This is another thing that you might want to check because if it got worse, you would need a professional to fix it.

One of the essential things that you need to check when maintaining your bike is checking the brake.

Since you are riding a big bike with a 103 engine, it can cause some serious trouble if you don’t check the brake line from time to time.

Check this not only when you reach the 5,000 miles, but check it every time you are going for a ride to avoid accidents.

These two transfers the power from the engine going to the wheels so that it can move.

Ensure that your bike’s belt and chains are in good condition to avoid trouble on the road.

Aside from the brake, tires are also essential to check. It can affect the performance of your bike if they are wearing worn-out tires.

Always check your tire’s condition, not only in the exterior part but also in the pressure of the tire.

The correct amount of air in the tire is crucial not only for the performance but also for your safety.

As you reach more miles, you have to check the engine and the while bike frequently.

It is not about the money you will waste in repairing it but for your safety.

The annual maintenance for a Harley Davidson can cost from $200 up to $450, but it can cost more than what you think if you do not take care of your bike. 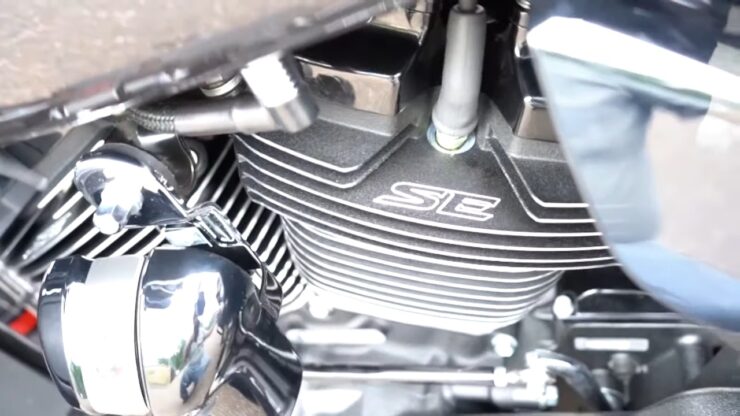 What engine is the Harley 103?

What year did Harley put 103 engines?

How many miles is a Harley 103 good for?

It will always depend on how you use your bike; this answer is if you properly take care of your bike.

Within the 150,000 miles achievement, there will be a time that you need to replace the comp, but overall, everything is good if you take care of the bike properly.

What is the price of the 103 Harley Davidson engine kit?

The price of the 103 engine today is $1,899 without any professional fee for installation. It is just the engine itself.

Every engine has its own problem, and it’s not new for every biker to encounter the issues that 103 engines have. The

You can always repair and check your bike all by yourself, but getting some help with the pros is what you will need if things got out of hand.

Following our tips and tricks to maintain and solve the 103 engine problem will prevent you from experiencing some major problems.