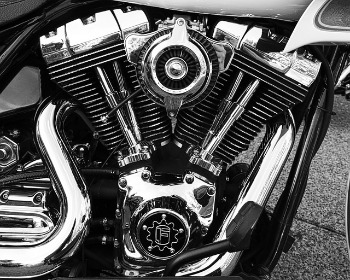 The Harley Davidson Twin Cam 88 reliability implied a significant improvement in performance and refinement for the company.

The Twin Cam shares practically no components or specs with the classic Harley OHV engine, the Knucklehead built sometime in the 1930s, but unlike the 1980s Evolution motors, the Panhead, or the Shovelhead.

Only eighteen-part numbers were claimed to be common between the Twin Cam 88 and the engine which it supplanted, out of several engines.

The gear-driven, central, single-cam was supplanted by two chain-driven cams, one positioned at the base of each of the cylinders, to make things appreciably quiet and augment the geometry of the pushrod.

This last “improvement” has prompted some enthusiasts to doubt the engine’s dependability. More about that will be discussed in this post.

Why Harley Twin Cam 88 Is A Popular Engine?

Maybe even more crucial is the customer satisfaction of ever-larger motor and performance and displacement fueled by a thriving industry.

Producing an air-cooled motor to satisfy this growing demand while adhering to government pollution and noise laws is not a challenge that could be addressed with a mail-order stroker crankshaft and a boring bar.

Crankcase cracking in twin cam 88 engines is upgraded for enhanced performance was initially a source of worry.

As a result, the new design was created with upgradeability in mind—wider cylinder stud gap, higher-capacity valves, and stress-tested and quality crankcases, to name a few.

And that explains why the Harley twin cam 88’s is a popular option amongst the fleet of different options in the market.

Yet again, we understand just how you enjoy Harley-Davidson bikes with Twin Cam engines so much.

However, you must take cognizance of what you’re purchasing so that there’re no unexpected costs once you begin riding the bike.

The Twin Cam engines have some flaws. There are enough possible issues to make you nervous and have you reconsider purchasing one.

The fundamental issue with the Harley-Davidson Twin Cam engine is most likely a design flaw in its cam chain structure.

The architecture of the actual product is shoddy. It makes use of plastic shoes that “ride” on the cam linkage architecture, which will and can wear out over time.

Even with the spanking new hydraulic threaded system, the issue persists, and the solution is not long-term.

So, what precisely is the issue here? The cam chains on the Twin Cam 88 engine come with plastic shoes.

Due to the extreme friction and frequent contact between the twin rubber shoes, when they rub against themselves, they’ll start to wear out over time.

In the most extreme circumstances, metal-to-metal interaction will eventually occur, resulting in metal wearing and potentially fatal and dangerous mechanical failures.

If this issue is not addressed and detected, the Twin Cam’s complete engine, including cams, pistons, and engine casings, may be damaged.

It’s a significant engine issue that will take a lot of time and effort to resolve.

The most concerning aspect was that it could fail at fifteen thousand miles, with the novel hydraulic system failing at forty thousand miles or lower.

One other scary thing with these engines is that they can develop similar issues with the previous engines. So it makes sense to check out the engine before purchasing it.

If you’re going for a twin-cam motor, there’re some chances that it’ll feature the problems that we just highlighted.

Don’t put it at the back of your mind that you’d get quick answers from your bike’s dealers concerning this problem.

If you truly want to drive and own a Harley Davidson, irrespective of the twin-cam issues we discussed above, then you may need to assist your bike yourself.

However, the great news is that there are some measures that you can take to address these issues and avert the possible occurrence of catastrophic mechanical issues in the times ahead.

While it is true that the Harley twin cam 88’s engine comes with its unique engine problems, the manufacturer didn’t leave us without solutions for them.

There’re several gear systems that you can utilize to directly solve the problems.

Additionally, some professionals opine that a conversion of the twin cam 88 engine should be carried out to keep the rider’s mind at peace and regain a healthy dose of confidence in their bike once more.

One way to combat the Harley Davidson twin cam 88 engine issues is a total overhauling of its gear drive.

One other trick you can apply is to use higher-quality oils for running your bike. Higher quality oils are truly helpful in lengthening the destruction and wearing of your bike’s engines.

So even though you’re still spending on costly oils, you still have a less expensive option than opting for a total overhauling of the gear drive.

But don’t expect it to address the issue. It only makes the problems come at a later time than they would have.

Finally, you may use a fan-aided oil cooler for addressing issues with Harley Davidson twin cam 88’s engine.

Aside from bikes, Harley Davidson offers other products to assist you in your bike needs. For example, you can cool your twin cam 88’s engine with Harley Cooling.

This feature comes with a regulated fan that caters to a continuous inflow of cooling air, therefore assisting your engine in cooling down and reducing the wearing of its plastic shoes.

We vouch for this because it directly deals with the problem head-on.

The Twin Cam 96 was made public sometime in 2007 as the model for the year.

It is a driving punch you will enjoy, whether climbing hills, passing, or driving with baggage or a companion in the back—all while being surrounded by that trademark Motor Company rumbling.

It also arrives at a slower cruising speed, resulting in a smoother ride, reduced engine noise, and improved motorway fuel economy. In all. The twin-cam 88 engine produces about 80 horsepower.

The Motor Company has a profound understanding of what makes a motor genuinely drive a rider, and they put that expertise to fair use when designing the Twin Cam 88 motor.

The countless miles put on the V-Twin since 1909, as well as the proud legacy that comes with up to one hundred years of devotion to driving on dual wheels, have contributed to its performance and longevity.

Feel the low-end torque released when you rev up the Twin Cam 88 engine. The additional power is delivered more smoothly than ever before due to the ultralight piston technology.

Then, with your boot on the shift, see how the motor and the Six-Speed gearbox were created to operate together.

There are six different speeds: a robust driveline and interior components. Regular maintenance is minimal.

And traveling at a slower speed couldn’t have been more relaxing.

There’s no denying the Twin Cam 103TM engine’s origins when you look at it.

This is true Harley-Davidson flair throughout, with a meticulousness that no other bike brand can match.

Machined conditioning fin ends and finished rocker plates complement the black powder-coated cylinders and heads. It is a metal gem crafted by hand.

It is bursting with force. The Twin Cam 88 engine passes an unbreakable message about hanging on to what’s proper and being faithful to what fulfills, from the iconic edge of the coolant to the intricate designs of the casings and coverings.

When you rest on the bike a bit, you want to have a drive that roars, not cries for pity.

On the motorway, the Six-Speed Cruise Drive delivers seamless, silent shifting while lowering motor speed, resulting in an improved match between road sped and engine turnover.

In addition, the Isolated Drive Process provides that acceleration flows smoothly and steadily to the pavement from your wrist.

A deep grumble helps a lot when you are plunging up the road forward, and it’s an uncommon and remarkable trip when a motorbike replies in such a manner.

How Many Years Does It Last?

The twin-cam 88 is a pretty good design that should likely get you a hundred and fifty thousand to two hundred thousand miles with regular maintenance.

The year 2006 was a transitory year in terms of complying with twin cam 88 specifications.

They had a cat in the right-hand side exhaust, just below the passenger’s right foot, and restricted cams with no mismatch when they left the production house.

Earlier twin cams utilized a timing belt, which rapidly deteriorated and was replaced with a chain.

Through the Twin Cam 96, this concept was preserved. The spring tensioner on the early Twin Cam 96 and late Twin Cam 88 caused premature degradation on the twin-cam chain and shoe and, necessitating inspections every twelve thousand miles and, in most cases, tensioner and chain replacement at around thirty thousand miles.

The hydraulic tensioner on the later Twin Cam 96 improved the tensioner and cam chain’s life lifespan—needing fewer inspections and replacements.

Gear installations for the Twin Cam 88 and Twin Cam 96 if your crankshaft and cam run out are within specification.

How many miles can you get out of a twin cam 88?

Is it true that Harley Twin Cam engines are dependable?

There are several flaws in Twin Cam engines. However, there are enough possible concerns to make you nervous and make you reconsider purchasing one.

What is the horsepower of a twin cam 88?

The engine of the Twin Cam 88 can produce around 80 horsepower.

How long does a Harley-Davidson engine last?

Twenty-five thousand kilometers on a sports bike is a lot. Harley-Davidson bikes are designed to last for a very long time.

The Twin Cam’s dynasty came to a close in 2016, when the company replaced it with the Milwaukee-Eight multi-valve dual-cooled engine, a whole new topic.

Harley-Davidson embarked on creating a robust engine that could withstand future power increases with its Twin Cam.

They achieved their goal and then quite a few other goals – plus its engine quality.

The Twin Cam engine evolved from the 88 to the 103 top-notch engines of the Project Rushmore over its manufacturing run.

Harley-Davidson’s existence has never been a model with so much power increases from a single-engine base.