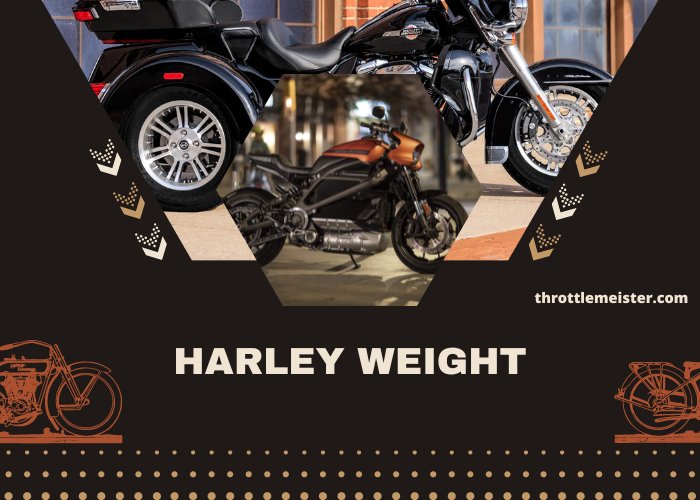 At least once in our lives, we all wonder, “How much does a Harley weight?”

Regardless of the reason why you asked such a question, we will give you an answer as accurately as possible.

The weight of the motorcycle, as well as the maximum weight it can support, are important factors, which must be taken into account when buying a Harley Davidson.

In this article, you will find the numbers of each type of Harley out there, and towards the end, you will find a guide on how to keep your Harley on a weight diet.

So without further ado, let’s get into it!

The Factors That Affect The Bike’s Weight

As you can imagine, there is no fixed weight for all Harley-Davidson models. Some are smaller, others are heavier, and their weight varies greatly from model to model.

Statistics say that the average motorcycle weighs 300 to 500 pounds, but that doesn’t tell us much, because we’re trying to find out the exact weight of a bike.

Moreover, it’s worth mentioning that your average Harley Davidson bike is much heavier than that.

There is also an important factor that determines the weight of the motorcycle, and here we refer to the components, the fuel, and the cargo that you have added.

For now, we’ll analyze the factory weight of each type of Harley Davidson motorcycle, after which we’ll talk about how much your bike should weigh with cargo on it..

How Much Does A Harley Weigh? 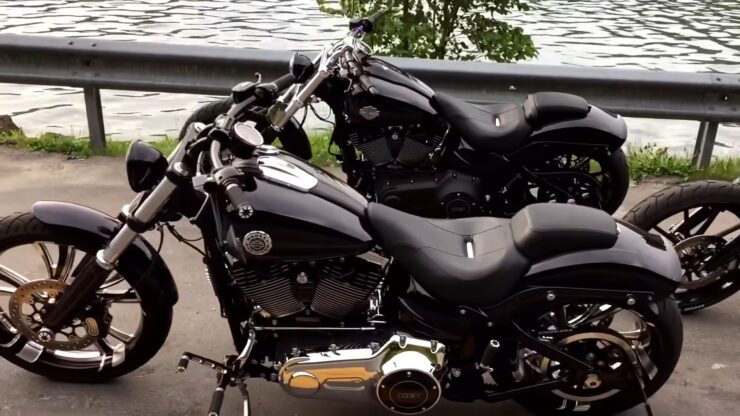 In this section we’re going to cover the weight of some Harley bikes.

Obviously, since there have been so many models from the past centuries until today, we won’t be able to cover all of them.

Dryweight Harleys should be about 50-60 lbs lighter than what people actually have.

The term “dryweight” refers to the condition of the machine when it comes from the manufacturer, ie without cargo, without fuel or other fluids..

Here we have the weight of some of the most popular Harley models. Even though there aren’t that many models featured on this list, you can still notice that most Touring models have about the same weight.

The same goes for cruisers or Sportster. It goes to show that the category in which a motorcycle falls is the most important factor when it comes to its weight.

How Much Does A Loaded Harley Weigh?

OK, now we know how much dry weight Harleys weigh, but what about loaded Harleys?

Here it gets a little harder because wet weight depends a lot on how much cargo you have on your bike.

You should also keep in mind that the difference between dry and weight will be greater on motorcycles that are made to have cargo on them.

For example, a bagger bike can have a much higher wet weight than its dry weight, compared to a Sportster.

Harleys weigh so much because they’re made of rather expensive materials because two people can sit comfortably on one because they feature multiple speakers and a lot more.

Again, you should not look at these numbers and be sure that your Harley with cargo and a full tank will have the same. In fact, chances are that your bike will weigh even more… 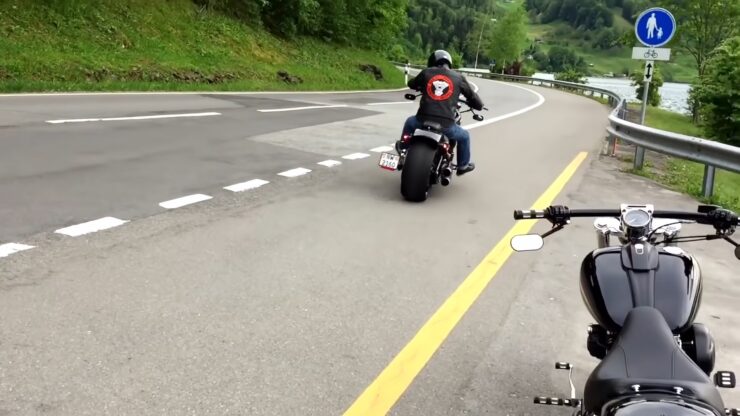 Weight is a factor to consider, as there are several issues on which weight plays a role.

First of all, it affects your bike’s speed, level of comfort, as well as general ride experience.

However, does a motorcycle have to be light or heavy to improve the aspects mentioned above?

It is said that when you want to buy a motorcycle, you have to buy it on the easiest you can get your hands on.

Why? Because people say that a heavy motorcycle is going to have a negative impact on pretty much every aspect of its performance.

And yet, all these things are contradicted by the very existence of Touring motorcycles.

Harley Touring bikes are very well known for how comfortable they are, as well as for their appetite for long journeys.

Not to mention that Touring bikes are the heaviest Harley bikes, and they’re also among the heaviest bikes in the entire world. They can surpass 1000 lbs!

So to answer the question, it again depends on the type of motorcycle that you’re riding.

For example, sports motorcycles shouldn’t surpass, let’s say, 550 lbs. If they do, you might see some performance issues.

But if you own a cruiser, you should know that these are generally much heavier than sports motorcycles and that it’s completely fine for them to reach 700 lbs.

So yes, weight matters, but every type of motorcycle has a different weight range that you need to respect.

Average Weight Of The Motorcycle Depends On Its Type

In this section, we will go over all kinds of motorcycles, along with their normal weight range.

You will notice that it varies a lot because there are dirt bikes that only weigh about 120 lbs, but there are also touring bikes that can go over 1000 lbs.

There may be others as well, but these are the most popular motorcycle types. As you can see, their weight varies a lot.

But usually, the heavier the bike, the more comfortable and functional they become.

And although comfortable bikes are heavier, lighter bikes are much faster. The choice is yours!

How To Keep Your Harley On A Weight Diet 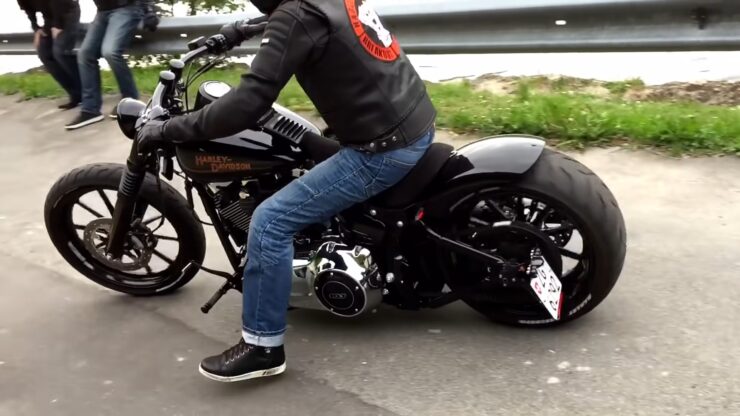 Keeping your motorcycle light has its benefits, so let’s see what you can do in order to reduce the overall weight.

Getting a lithium-ion battery is a great solution, as it can weigh even 70% less than your stock battery. They are pretty expensive, though, so be careful.

An aftermarket pipe not only is lighter, but it will also sound a lot better than that loud stock exhaust.

Ditching the steel sprocket for an aluminum one is a great idea since steel is twice as heavy as aluminum, which is unnecessary.

If you don’t ride two-up, the passenger seat is virtually useless. In fact, removing it is going to make your bike feel much better.

This should have been number one on this list since it’s a no-brainer. But sometimes, the easiest solutions are also the best.

If you think about it, the rider is one of the heaviest things on the motorcycle, so losing a little bit of weight is going to do you and your bike a favor!

Q: What is the heaviest Harley bike?

A: Harley Davidson CVO Road Glide Ultra is not only the heaviest Harley bike but also the heaviest motorcycle you could get your hands on.

Weighing 900 pounds dry and potentially reaching over 1000 lbs with cargo, this motorcycle is an absolute monster.

Q: How much does a Harley weigh?

A: It entirely depends on its model, as the weight varies a lot. Sportsters are probably the lightest Harley bikes, with the Sportster S at about 450 pounds and 1200 at 562, both dry.

At the other side of the spectrum, we got the touring, one of the heaviest of them being the Road King, weighing 800 pounds dry.

Q: Why does weight matter?

A: Weight matters because lighter bikes usually are faster and have much better acceleration than heavier ones.

On the other hand, heavier models, such as touring and baggers are much more comfortable, as they are designed for longer trips.

Even so, many people try to keep their bikes as light as they can in order to get that extra acceleration.

Q: What do “dry” and “wet” mean when talking about weight?

A: A dry-weight motorcycle is one that comes from the manufacturer, so it doesn’t have any fuel, fluids, or cargo on it.

On the other hand, a wet motorcycle has everything it needs and thus is somewhat heavier.

In some cases, a “wet” motorcycle can be heavier than a dry one of the same model with 100 lbs.

Q: Why do Harleys weigh so much?

A: Harleys weigh a lot more than other bikes because they are made of materials that are relatively expensive.

Moreover, they have two very comfortable seats and plenty of room for cargo.

Last but not least, Harleys have multiple speakers and other devices that add a lot to the total weight.

Q: What is the lightest weight Harley?

A: Street 750 and Street 500 are both relatively light motorcycles, weighing almost 500 pounds and 450 pounds, respectively, both dry.

As you can see, even these models are much heavier compared to other bikes.

A: It is said that one of the problems with heavier motorcycles is that they are harder to handle, especially for short and light people.

It is true, which is why lighter motorcycles are considered better options for beginners.

A: The chances of survival in the event of an accident are higher for riders that have heavier bikes.

The reason for this is that they are sturdy and much harder to get knocked down.

Depending on the model of the Harley motorcycle, its weight can vary greatly.

But even if you prefer heavy motorcycles, like touring or baggers, it’s important to keep them healthy, so don’t load them too much.

For this, keep your Harley on a “weight diet,” and you’ll see how much better they perform when they’re only a little bit lighter.

Last but not least, check out the YouTube videos from the next section, as they could be of great help to you.