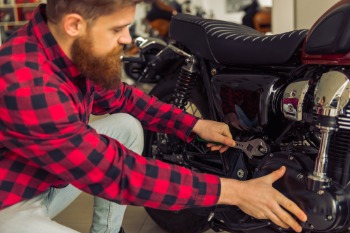 In this article, we are going to talk about the Harley Davidson clutch adjustment.

Here you will find all the necessary information, such as cost, duration but also a step-by-step guide of how to adjust the clutch yourself.

Moreover, you will find out under what conditions the clutch needs to be replaced as a whole.

Most likely you only need an adjustment, which must be done from time to time.

As a rule, your clutch will need an adjustment about every 5000-6000 miles, so you better learn how to do it yourself, as it’s surely going to save you a lot of money.

In other words, how much is a Harley Davidson clutch adjustment going to cost you? Well, it entirely depends on whether you plan to do it by yourself or ask a mechanic.

We believe that adjusting a clutch is not all that complicated, so – as long as you have the right tools – you should be able to do it by yourself without a problem.

We will go over the tools in a little bit, but let’s take a look at how much a mechanic would charge for an adjustment job.

A mechanic could charge you anywhere from 40 to 100 dollars. It depends on the mechanic you are requesting this service from.

One thing you should be careful about is overcharging. Some mechanics will try to make more money from the lack of customer experience.

For this reason, it is good for you to know in advance the adjustment process, at least to some extent, and to be willing to pay an appropriate amount of money.

Keep in mind that we’re trying to adjust the clutch, not replace it altogether. A replacement would’ve been a lot more expensive, maybe in the range of 400-500 dollars.

As we said, if you plan to do it by yourself, you’ll need a few wrenches. If you don’t have the necessary sizes, purchasing them can end up being more expensive than taking the bike to an actual mechanic.

Below you will find the complete list of necessary tools. Read it carefully, because depending on this you will know if you can do the adjustment in your garage or not.

How Much Time Does It Take?

An experienced individual will get it done in under ten minutes. But following a step-by-step article or video while simultaneously adjusting the clutch will probably take you a little bit more.

Let’s say the entire process will take you thirty minutes, from start to finish.

To make it easier, we are going to split the process into 6 steps. The first two steps are preparatory steps, as they are necessary in order to get to the adjustment itself.

The third and fourth steps are where the magic happens, and in the last two steps we’re gonna wrap up and basically do the opposite of what we’ve done in the first two.

First, we have to turn our attention to the clutch cable. We’re talking about that cable that stretches from the handlebars to the actual clutch at the bottom.

Around the middle of it, you will notice a rubber that covers a particular section of the cable. What you need to do is remove that cover by hand. Just slide it down in order to have access to the cable adjuster.

The role of that rubber cover is to protect the cable adjuster from various foreign objects, such as dirt, dust, rain, and so on.

This is very important because before doing the adjustment down on the actual clutch, we need to loosen the cable adjuster a little bit.

The next preparatory step is removing the derby cover. The derby cover has a circular shape and is held in place by 5 screws.

All you have to do is remove the 5 screws but be careful while doing so because it is possible that a little oil will leak from behind the lid.

It is a normal event, but we recommend that you get a cloth by your side in case it really happens.

Behind the derby cover is the actual clutch, and with this step done, we can go and do the adjustment itself.

03. Working on the cable adjuster

Now that you removed the rubber cover, you should be able to see a long nut, which is the adjuster portion, and a smaller, lock nut.

To work with these, you are going to need two wrenches.

The ½ inch wrench is used to stabilize the long nut. With the other arm, take the 9/16 to break loose the lock nut.

Next, roll the lock nut up with your fingers. The reason we do this is that we want to create space for the adjuster nut.

So go ahead and do the same with the longer nut. Roll it up, just as you did with the lock nut. This is going to create a lot of free play in the lever, which in turn will allow us to work with the actual clutch adjuster.

04. Working on the clutch adjuster

Again, you will need two tools: the Allen wrench and an 11/16 inch wrench.

While holding it still, take the 11/16 and break the lock nut loose, as I did with the lock nut of the cable adjuster.

Using the Allen wrench, back the adjuster screw off just a little bit, then screw it back in very slowly until you feel something touching. It’s very faint, so don’t rush it.

After you feel it touching, back it off again half a turn, but not more. Other mechanics turn it half a turn and a little bit more, but it depends on your preferences.

When you’re done with the adjusting, give it a try and see if you like it. If not, you might want to redo it, this time turning the Allen wrench a little bit more.

Once you’re done, keep it in place again with that same Allen wrench and tighten the lock nut exactly as it was before you started the adjustment operation.

And there you go! The adjustment is complete. We’re going to wrap everything up in the following two steps. Don’t skip them, they’re just as important.

Now we need to go back to the clutch cable and essentially do the exact opposite of what we did before.

Run the adjuster nut back down. Don’t tighten it too much though, and then tighten the lock nut too. Again, no need to overdo it.

Finally, remember to put the rubber cover back on in order to avoid dirt and other nasty stuff getting into your clutch system.

06. Putting the derby cover back on

The last thing on our list is putting the derby cover back on. 5 screws and you’re done! Now your clutch lever should feel much better.

So far we have talked about how to adjust your clutch. Let’s also talk about replacing the clutch, because – although it is a much rarer event – it is also a much more popular topic.

Some people have done some research in order to find out once and for all what the average lifespan of a motorcycle clutch actually is.

We recommend that you take a look at that blog post, as it contains interesting information on this topic.

The main idea is that there is a lot of variation between riders, as some have said that their clutch is still fine after more than 60,000 miles, while others complain that the clutch needs to be replaced after only 7000 miles.

But chances of being in the situation of needing a replacement so early are very slim. Our recommendation is to make sure that the discomfort caused by the clutch cannot be eliminated with a simple adjustment.

Also keep in mind that replacing a clutch is much more expensive than adjusting it, so that’s another reason not to rush to replace it.

However, in case you do need some replacement kits, below you will be able to find 3 clutch kits, which have been tried by many customers. These products have received, over time, many good reviews.

Some Harley Clutch Kits You May Check

Q: How do you adjust the clutch on a Harley Davidson bike?

A: There are a few steps to adjusting the clutch. Let’s go over the main steps, quickly:

First things first, you need to reveal and adjust the clutch cable adjuster.

Then, remove the derby cover and – with the help of an Allen wrench and an 11/16 inch wrench – move the adjuster screw until you feel something touching.

Once you’re done, remember to screw the lock nut back in, to roll the cable adjuster back down, and to put the rubber cover back on.

The entire process is a little bit more complicated, that is why we strongly recommend you check out our entire article.

Q: How often should I adjust the clutch on my Harley?

A: Specialists recommend getting your clutch checked and adjusted every 5000-6000 miles. Other people will tell you that this is way too often and that they only do it once about 30,000 miles.

Of course, it depends on your preferences, but we recommend that you do not wait too long between two adjustments.

A well-adjusted clutch means having a safe bike, so adjusting doesn’t only increase comfort, but also the safety of you and those around you!

Q: How much does a clutch adjustment cost?

A: Depending on the mechanic you ask, the adjustment will cost anywhere from $40 to $100.

Remember that a clutch replacement is definitely not the same thing as a clutch adjustment, because a replacement job is only very rarely necessary and will cost you much more. (maybe over $ 500)

However, doing the adjustment by yourself at home can be considerably cheaper if you have the necessary tools. We have listed the tools in this article, where you can also find an in-detail step-by-step guide.

Q: What are the symptoms of a bad clutch?

A: Are you having problems shifting gears? Is your level stuck either when you pull it in or when it is released? Is your bike getting worse gas mileage?

All of these are problems that should concern you, meaning you should probably get your clutch checked by a mechanic.

In order to avoid these issues, take good care of your bike and clutch and change the fluids regularly. Even so, with older bikes, clutch issues are almost inevitable.

Q: Should I replace my clutch?

A: If you encounter problems caused by a bad clutch, such as not being able or having difficulties shifting gears, or maybe getting the lever stuck in a single position or even getting worse gas mileage, then having to replace the clutch becomes a possibility.

The clutch can also be repaired, but the one who will definitely be able to tell you is a mechanic.

Adjusting the clutch is something that you need to do from time to time because a bad clutch is not only uncomfortable but also dangerous.

Experts believe that a clutch should be checked and adjusted every 5000 to 6000 miles,

Fortunately, it’s not a complicated process, so – if you learn how to get it done – you’ll be able to adjust your clutch in your own garage with only a few wrenches.

With the help of our step-by-step guide, you’ll get it done in no time!