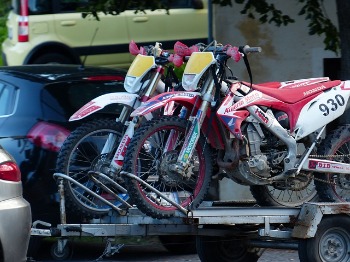 Want to take your bike far away but lack a chock? Don’t worry – it’s still possible to bring it wherever you go.

But for that, you may want to learn how to tie down a motorcycle on a trailer without a chock.

This will not often be useful, as a chock is pretty much essential, and most people have one. But it happens.

And when that happens, you’ll want to be prepared. This guide will help you with that.

Check below for more info!

Why Need a Chock for Motorcycle?

There are times a motorcycle shouldn’t be ridden – through bad or flooded terrain when needing significant repairs or simply to avoid long-distance travel strain.

For oversized bikes, you can’t just lay them down on a pickup truck bed or trailer.

These heavy bikes need to be well secured to avoid getting damaged – or, worse, becoming the cause of a tragedy – if it topples or is sent flying accidentally.

Strong straps will secure the bike. The tricky part is to keep the front wheel stationary. That’s when a chock is practical – it’s a solid metal brace to prevent the wheel from moving side to side.

The bike frame can then be strapped down securely.

Advantages of Using a Chock

A chock firmly holds the front tire in place when used correctly. It also avoids it being worn down with excessive rubbing against the trailer floor bed.

Lastly, it’s helpful to keep an overhanging mudguard from scraping against an upright retainer frame or getting badly dented.

Further, the chock is handy in a garage or parking spot – as an extra hold to ensure the bike stays upright, instead of just being reliant wholly on the kickstand.

This adds extra safety when washing or working on the bike, preventing the front wheel from moving unnecessarily.

Disadvantages of Using a Chock

The downside is that a chock doesn’t always stabilize the bike by itself. It needs to be secured as well.

A chock has to be bolted down and can leave scrape marks or depress the truck/trailer floor bed.

If there aren’t already bolt holes available, these need to be drilled – not a good option if using a rented transport or avoiding any damage to the floor bed.

The last point to consider is the cost of getting a chock. If it’s intended for just one-time use, do note there are other ways to transport the motorcycle on a trailer or truck without a chock – by using sturdy straps.

Before deciding how to tie down a Harley Davidson motorcycle on a trailer or pickup bed without a chock, there are some key points to check out first.

To ensure this heavy bike stays secured, there should be a solid rail or firm linchpins on the trailer framework – ideally four, better to be more.

These linchpins act as strong anchors to strap in the motorcycle, and they’d be subjected to high tension if the transport route is along some bumpy roads.

If any of these linchpins are weak, what could happen next won’t be pretty.

The strength rating of straps is next on the checklist. Remember, the bike easily weighs over 500 pounds.

The higher the strap strength rating, the less likely it is to snap when full tension is applied.

The final point is deciding which type of strap tension control mechanism being used.

We prefer the latter. Let us now show how to tie down a motorcycle with ratchet straps.

You can also use a brick as a buffer to avoid the mudguard scraping against the raised front edge.

Apply the parking brake and remove the engine start key.

When strapping the rear, alternate point-to-wheel forks can be passenger handholds along with the seat.

The back straps act more like an extra brake to prevent the bike from sliding forward or moving sideways – and that’s how to tie down a motorcycle in a trailer.

Here’s a video to help you get a better idea of how this is done;

This is also how to tie down a motorcycle in an enclosed trailer, don’t loop to the flip-close door.

If the bike is in a pickup bed, don’t strap it to the pickup’s rear bumper, as that can be yanked off by excess tension.

Just remember, there’s also the need to unstrap the bike at the destination – in the exact reverse of the step-by-step strapping-in process.

It’s easy to overlook the raised kickstand at that point – so why tempt disaster?

Can I reuse bike straps, or must I always get them new?

If you keep them clean and dry in a cool place, they can be reused. If there are any frayed or stained points, it would then be better to get new straps. Why not err on the side of safety?

Is it alright to use just 2 straps, securing only the front wheel?

If a professional tow service staff does so, they may have enough daily experience to do it right. As a DIY effort, is it really worthwhile taking that risk to potentially damage your bike or worse?

Can I add more straps to make the bike even more secured?

It’s enough to have 4 straps to secure the bike. Depending on where you loop the extra straps, there’s every risk of scraping paintwork or causing suspension damage. Ask at a workshop to be really sure.

Should two bikes or more be secured on the same trailer?

If the bike strap-down is DIY, it’s better just to have a single bike for each trailer. You need to ensure the trailer isn’t off-balanced by where the bikes had been secured or if one motorcycle far outweighs the other.

What if there’s sudden loud rattling during the bike transport?

Stop immediately and check the straps on the bike to ensure they’re all still secure. As an added precaution, sit on the motorcycle and see if it’s possible to move it.

If everything’s adequately secured, check the bike cables and wires – these may have come loose and are rattling against the bike or trailer frame.

Or there may be some loose objects on the trailer bed that need to be cleared out.

If no problems can be detected, take a short drive around the block to check if the rattling returns. If it does, it’s best to get this problem looked into at the nearest workshop.

Using the tie-down method to transport the motorbike on a trailer can be feasible – as long as unnecessary risks are avoided.

If you put that to work, then you’ve learned how to tie down a motorcycle on a trailer without a chock.

The biggest unknown is always the person securing the straps – especially when it’s a DIY effort! Overconfidence can be really dangerous.

Always check and check again – even professionals do it – to make sure safety is never compromised.

When in doubt, it’s better to consult a professional.