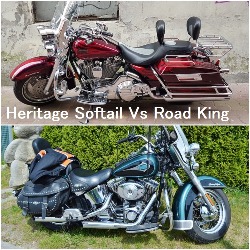 When it comes to motorcycles, Harley Davidson is one of the best makers. They have one for every occasion including touring.

This makes it quite unsurprising that two of the most preferred motorcycles for touring comes from them. While they come from the same maker, there are fundamental differences that make one suitable over the other.

There have been arguments about the differences, and which is a better choice. Which is worth its price.

What we do know is that the better one for touring has to take care of the comfortability of the rider as well as the ability of the bike to run for a long time without having any issues.

We have put together helpful tips and information that would help you make better decisions on what to look for before purchasing your motorcycle.

Why is Heritage Softail & Road King so popular?

Harley-Davidson is a brand that has over the years built a reputation around making good and quality motorcycles.

They produce a large variety of bikes and ultimately almost every rider wants to add one to their collection. Many users feel a deep and innate connection with the brand. It appeals to them.

This is why it isn’t far-fetched that several discussions relating to the brand and its products pop up on occasions.

The two most popular families that enter the discuss radar are the Softail and the Road king families.

Across both families, the Heritage Softail and the Road King bikes are the most comparable.

For users that are undecided about which is better, buying the two would have been a great solution to their problem. However the bikes happen to be quite pricey, so one has to be chosen.

Buyers often dwell on why they should pick one over the other and they want convincing reasons as well as an assurance of getting good value for their money.

This is why there is constant banter over which is better. Some might argue, it is road king, others will affirm it is Softail. At the end of the day, it all gets down to personal choice.

Road King vs Heritage Softail Classic which is Best for Newbies?

If you are just starting bike riding, then you should get as much information as you can about the bikes by paying attention to the Heritage Softail Vs Road King argument.

A more user-friendly one is the best one to go for in your case. In this area, Heritage Softail wins. This is because it has much better ergonomics.

The difference begins at the handlebar. The Road King’s handlebar has an unsuitable beach cruiser bend because of its size and positioning on the motorcycle.

This is made far worse by the floorboards which are placed at a higher position. The effect of this is that the hands of the rider come quite close to the legs making riding uncomfortable as the journey gets longer.

On the other hand, the Heritage Softail has a specially shaped handle and low floorboards that give riders a lot of room to place their legs.

The Road King does not come with any kind of rest so the user has to remain in the riding position.

While the Road King offers limited comfort, it does a great job concerning its engine during high-speed travel.

As soon as the Heritage Softail hits about 85mph, the rider starts to feel the vibration of the engine but the Road King continues to provide a smooth ride even when at high speed.

This difference is due to the way the engine is mounted on the two bikes.

The Road King’s engine is rubber-mounted while Heritage Softail is mounted with the new counterbalance method.

Heritage Softail is not so good with high speed but this touring motorcycle has very good low-speed agility owing to its lower-sung chassis.

The positioning of its chassis as well as the low height of its seat make it a great choice for a small rider.

Heritage Softail tackles tight turns easily but the opposite can be said for it when it comes to cornering turns which are ever-present on highways.

It happens to have a low center of gravity which makes navigating corner turns quite difficult.

Its board begins to drag much before its counterpart.

The Road King on the other hand as a high swung Chassis which gives it an edge in this area.

It easily heads through a corner turn at good lean angles and avoids scraping the highway.

Not every road is smooth and stable. while touring riders are more likely to come across roads that have more cracks and bumps.

For this reason, a touring bike needs to have a very good suspension.

The two bikes have a suspension level difference with the Road King on the better end.

Its suspension is high enough to absorb any shakes that would be caused by small cracks or bumps.

This is good but it makes the rider feel somewhat disconnected from the road.

While this is what some riders like, others love to have a better idea of what the road feels like. For people like this, Heritage Softail is a better fit.

It has less suspension so it provides a more realistic view of what the road is like.

This is another area where the Heritage Softail practically floors the Road king.

It is worth mentioning that the Heritage Softail is fitted with the updated tyranny-built gearbox which comes with the Twin Cam Beta.

This incredible gearbox makes sure that shifting is a smooth and quiet process. It also features a tighter clutch pull.

The Road King has hard leather-covered saddlebags that are durable and waterproof. Unfortunately, this is where the good stops.

The saddlebags are quite unsuitable. They are hinged on the passenger side instead of on top. This complicates loading and unloading. They look good but the functionality is way off.

The Heritage Softail is fitted with soft leather bags which happen to be rather small. These saddlebags were a good fit for earlier versions of the bike.

Now that the bike has been upgraded the makers should consider upgrading the bags too.

Apart from comfortability and other areas mentioned above, many basic features in the Heritage Softail are different in the Road King. Here is a Heritage Softail vs Road King table that highlights these features:

Biking is a great way to stay in shape, as well as it is fun. However, the comfortability of a bike also depends on its purpose and the rider’s build.

These too must be considered before a choice is made.

The Heritage Softail is the ideal bike for riders who weigh less than 200 pounds while the Road King is sturdier and better for heavier and taller riders. it sure would provide a much better power-to-weight ratio.

Softail is more comfortable for shorter journeys like visiting friends or running errands. It has a lower seat, which makes it easy to stop.

On the other hand, the Road King has seats that have a larger surface area. It is sure to be kinder in your bum.

Road King is better on long distances, where you are looking at moving at a higher speed, with fewer stops. It can travel up to 15-20 miles more than the Heritage Softail.

Road King with a height of 705 mm. This better height makes it easy for you to lean forward and places you in an aerodynamic position necessary for your trip.

The road king has a more solid build which helps out with its distance. This is probably why it is a considerably higher weight.

It also stops the Heritage Softail with about 50mm in length. This gives it an edge when two-up riding is needed as it gives more room for the passenger on board.

The Heritage Softail was not outrightly made with two-up touring in mind.

The length also helps to provide more space for storage which is very important while touring.

1.Heritage Softail vs Road King. Which is a better touring motorcycle?

For touring, the Heritage Softail is a better motorcycle choice. This is because of its superb riding position and it’s overall easy feel. But of course, opinions might differ.

An ideal comfortable bike for two-up touring would be a Road king Bike. It also has more storage space so if you tend to carry a lot around it would be the best choice for you.

2. Is the Heritage Softail a good touring bike?

The answer would be yes because the Heritage Softail puts the rider in a good riding position. The position ensures that the rider is comfortable.

Another reason is how much of an easy feel it gives the rider so riding can be nice and easy.

A Harley Davidson Softail is a motorcycle that has its rear suspension springs or shock absorbers positioned out of direct view, such that it looks like a hard-tail motorcycle.

Its engine is also positioned in such a way that projects a vintage feel to it.

4. What is the difference between a Heritage Softail and a Road king bike?

There are a couple of notable differences between the two motorcycles.

5. Is the Road King a Good Bike For Touring?

Yes, it is a good bike for touring. A Road King is an exquisite touring bike with a good frame that provides a stimulating and unique road feel. It has an upright riding position that puts you in great control of the bike.

The road king comes with a rubber-mounted engine, a six-speed gearbox, and a six-gallon fuel tank.

It is also very comfortable as it comes with a pillion seat, a floorboard, and passenger grab rails.

It is versatile, cruises easily, and provides good comfort for your touring.

6. What is the engine CC of a Heritage Softail?

The engine CC where CC refers to cubic centimeters is the volume of air and fuel that can be pushed through the cylinders of an automobile.

The Heritage Softail has a 1745 engine cc.

These questions and the features explained above give you a pretty good idea of both automobiles.

If you are still unsure, you need more information or you want a second opinion, here is a link to a YouTube video that could help.

In this video, you can see both sides by side and watch an experienced rider compare and contrast. May the best bike win!

The Heritage Softail Vs Road King argument is an ongoing one that changes. This is due to many things such as yearly upgrades on each of the motorcycles.

The upgrades greatly affect how suitable each motorcycle is. Following the latest upgrades on both the Heritage Softail appears to be the better choice for touring for many reasons.

Although it tends to emit vibrations at very high speeds and has less suspension. These two issues are not a deal-breaker when it comes to touring.