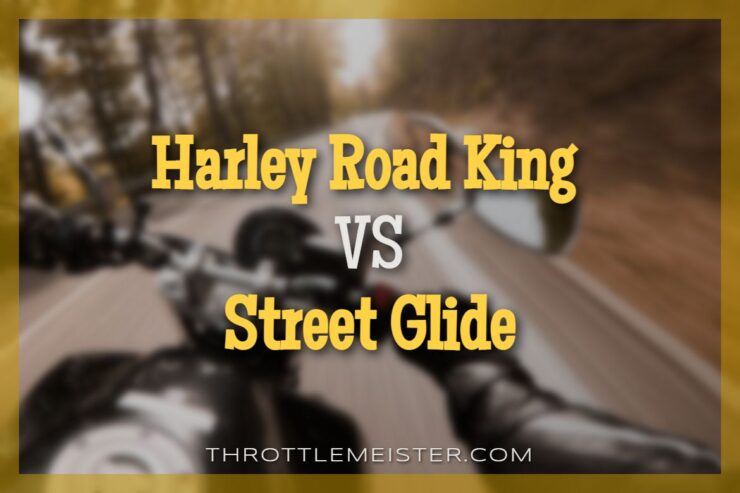 Most times, cyclers and tour bikers are usually at a crossroads about which motorcycle they should buy or rent.

The question is common, “Street Glide or Road King, which is better?”. That brought you here.

Harley road king and Street Glide differ in features, even though they are similar. In this article, we will discuss their differences.

After reading our full analysis, you’ll be able to decide on what you want.

On the question of which is better, that’s for you to decide, because, for every difference in the features between the Road King and Street Glider, there is an underlying advantage and disadvantage which you may find important or unimportant.

In this article, Road King won’t be declared the best and neither will the Street Glider.

As the decision-maker, you have to capitalize on their merits according to your priority or needs. The choice is yours. We are merely providing the necessary knowledge.

Street Glide vs Road King, why is it so popular?

Road King and Street Glide are the two most popular and competitive road bikes manufactured by Harvey Davidson, one of the oldest motorcycle manufacturers in the world.

It is a more interesting topic, knowing that both Road King and Street Glide are products of the same manufacturer.

The topic of Road King versus Street Glide always results in an endless series of arguments. Although both Road King and Street Glide have their respective die-hard fans.

Also, respective die-hard fans would recommend their favorite(s) to potential buyers. Their favoritism is based on their prejudicial preference.

Some love the look, some comfortability. But until you have a road experience with any of these tour bikes, you can’t tell what suits you.

Also, Street Glide and Road King share the most similarities among the motorcycle designs of Harley Davidson.

Their capabilities made them a contestable topic for tour riders. Moreover, given that both Street Glide and Road King has almost the same price tag, “which to buy” becomes a necessary question asked by potential buyers.

Which one is better for newbies/beginners? 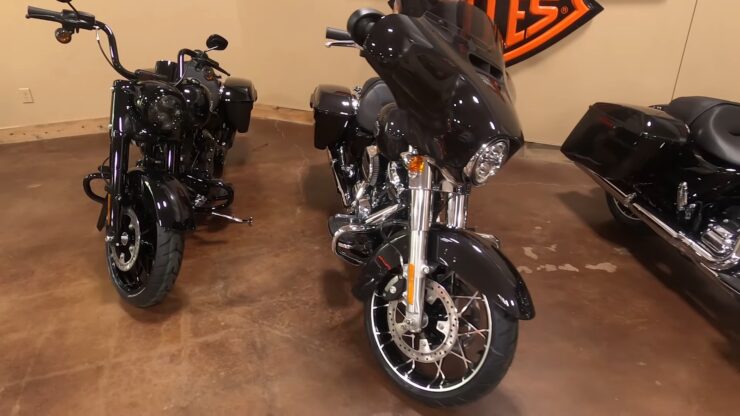 This is a commonly asked question. Beginners are always on the lookout for motorcycles with easy handling, Road King or Street Glide?

Considering different factors such as the bike’s weight and maneuverability which contributes to handling, Road King is commonly recommended for newbies.

Most newbies get to read reviews and become confused. It should be noted that reviews are written reports of riders’ experiences.

As a newbie, you shouldn’t be confused or convinced with the interesting adjectives used to qualify either Road King or Street Glide. It is wise that you experience the “adjectives”.

Although recommended, Road King can’t suit everyone’s riding style. So, it is advised that as a newbie, you test ride both Road King and Street Glide.

The kerb weight difference is not a big deal for a pro tour rider, but it is for newbies.

It just happens that when you get to like one of these tour bikes, the weight doesn’t matter anymore. Newbies can always pull it off with a few weeks of consistent practice.

The Road King has a frame-mounted fairing, while the Street Glide has a fork-mounted fairing. This variation affects the wind protection and rider’s triangle.

Other factors to look out for as a newbie is fuel tank capacity, fuel economy, and transmission system.

Luckily for you, a test ride might not be needed. Their merits and demerits which will be discussed later in this article can give clarity to your choice of either Road King or Street Glide. Unfortunately, that’s not always the case.

The truth is, as a beginner, whichever tour bike you choose between Road King and Street Glide, practices will make it your favorite. 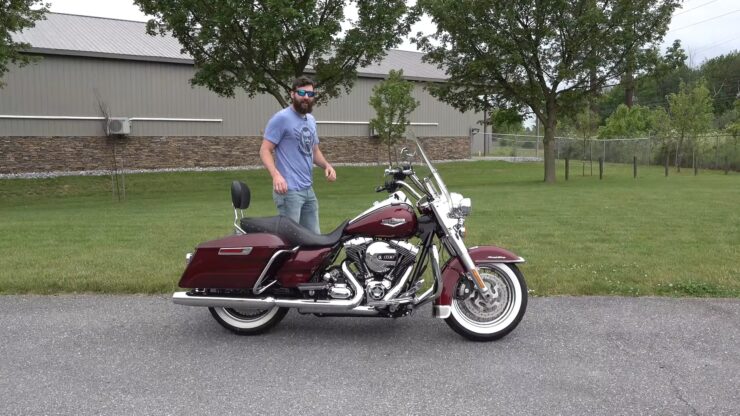 Street Glide versus Road King is a very interesting topic. In the next few outlines, we will take a look at their features differently and their notable differences.

Also, their pros and cons will be analyzed for a better understanding of the effect of their varying features.

Street Glide and Road King are similar at a first glance, you decided to know beyond the artistic designs.

These similarities start from the design, then the engine capacity, fuel tank capacity, and length. The variation in the parts composed in both Road King and Street Glide makes Road King a bit heavier than Street Glide; just by 15kg.

Road Glide’s frame-mounted fairing gives it a shark-nose look. Street Glide on the other hand has a “batwing” fairing, which is common to other Harley-Davidson motorcycles.

This makes Street Glide ideal for night riders, can you envisage that? What’s more beautiful.

The table below will give a brief overview of what Road King and Street Glide don’t have in common. It would be inadvisable to stop here, there is more to know besides this tabular comparison.

Engine: The Street Glide has an engine capacity of 1745CC which makes it fit for a long mileage tour. With such capacity, riders can travel across countries with no mechanical damage.

Price: The price ranges according to color and added optional upgrade. But the least priced amidst Street Glide color variants, vivid black is about $21,999.

Weight: Owing to its double cradle chassis and enforcer cast aluminum in both suspensions, it weighs 361kg.

Lest I forget the obvious difference, it has a fork-mounted fairing which affects its wind protection style. It has a fuel capacity of 22.7L. Also, its headlight is halogen lit while the taillight is led lit.

Engine: Like the Street Glide, Road King has an engine capacity of 1745CC, this makes it a road favorite.

Price: Without special upgrades, you can get a Road King for at least $27,299.

Weight: It weighs 376kg, heavier than the Street Glide. This feature aids its balance.

Besides these amazing features, the Road King has a frame-mounted fairing and led lit headlight and taillight.

1. Which has a more plush seat? Road King or Street Glide?

The Road King has a seat height of 705mm while the Street Glide seat’s height is 715mm. This doesn’t directly affect the plushness of the seats. The comfortability of the seat is in retrospect of the rider’s height and riding posture.

The seat’s height influences the handling of a touring bike. Once there is a struggle to reach the throttle, comfortability is compromised.

As a rider, how long can you ride with inconvenience? A few minutes of test ride will save you a series of logical evaluations about your comfort or likely discomfort.

Concerning seat comfortability, all riders’ have their preference. Which seat is best for you? You can only find out with a test ride. There are bike garages that offer free test ride, it would be a cool way of affirming your fit.

You don’t like the stress of finding a garage, right? There are digital garages that offer test rides too.

All you need to do is book a ride on their website and visit the physical garage or location on the set date.

2. How much shorter is Street Glide vs Road King?

Although both the Road King and Street Glide have the same length, 96.5 inches, the Street Glide has certain features that make it slightly shorter and aids its maneuverability.

The Street Glide has a slightly lower chassis and a seat height of 27.4 inches. Coupled with this it has a standard fairing which ensures windbreak during a ride.

So, without a close look, Street Glide and Road King have the same length, the shorter chassis in Street Glide is the key to the difference in dimension. 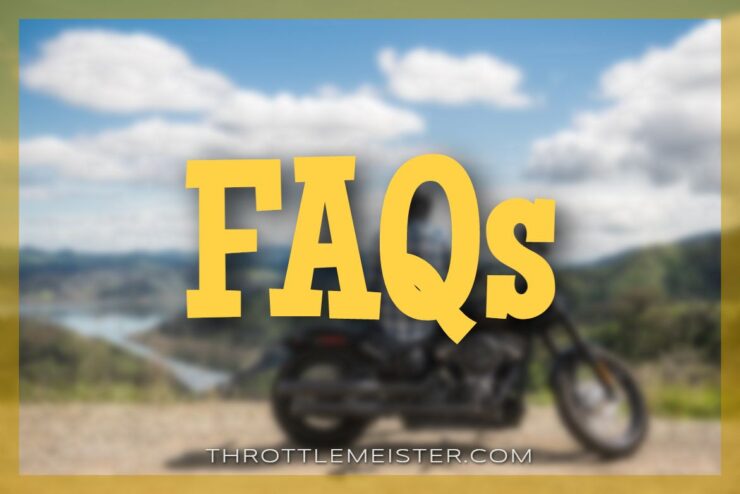 1. Road King or Street Glide, which is best for me?

The best anyone can offer you from these two similitude tour bikes will be based on their differences.

Many have made the mistake of buying a touring bike based on someone else’s recommendation.

To avoid traumatic regret and get your money’s worth, do a test ride. There is a bunch of bike garage that offers a test ride at reasonable prices or no cost.

With a test ride, you can assess the bikes’ comfortability, maneuverability, capacity, and see what upgrade you desire.

Investing a few bucks on a test ride is better than buying an uncomfortable tour bike.

2. What are the factors that affect Road King or Street Glide’s prices?

The available color variants thus. It’s all worth the price.

Also, upgrade influences the total price you eventually pay for a touring bike. Each upgrade has a different price tag. Likely upgrade for a Road King or Street Glide includes suspension, transmission, and engine upgrade.

Harley-Davidson is the manufacturer of both Road King and Street Glide.

Harley-Davidson has been in the motorcycle industry for almost a century, designing and selling top-notch motorcycles that stands the test of time and road.

4. Road King or Street Glide, which has the best performance?

If the performance is based on power and handling only, they would be on par. But Road King has greater maneuverability due to its slightly greater lean angle.

Sincerely, a tour bike’s performance is a display of a rider’s expertise. The performance of Road King or Street Glide can be maximized with years of practice.

So, which has the best road performance? The question should be which can you handle better. Isn’t that cool.

If you are a music lover, Street Glide is made just for you. Street Glide comes with an Infotainment System that allows riders to listen to music on a 5.35-inch speaker. This Infotainment has Am/Fm feature and USB compatible.

5. What are the similarities between the Road King and Street Glide?

Both Road King and Street Glide uses Milwaukee-Eight 107 engine. It doesn’t stop at that; both are 96.5 inches in length.

These similarities can only be altered with a few upgrades when necessary.

6. Can a Street Glide seat be replaced with a Road King’s?

Their seats can be used interchangeably. Although it might not fit perfectly, it will be quite unnoticeable.

Harley Road King and Street Glide are very much alike. The truth is, the similarities they share are more than the differences. The effect of these differences can only manifest through a riders’ experience.

Road King’s strength is Street Glide’s weakness and vice versa. When selecting one according to your needs, there are questions you should ask yourself. The answer is in the differences.